With the exception of complex, long (e.g. >50 AA), or industrial scale synthesis, which often uses liquid-phase peptide synthesis, solid-phase peptide synthesis (SPPS) is the industry norm for small and meso-scale production of peptides. In SPPS, the first amino acid and nascent peptide is C-terminally linked to a solid-phase resin; typically, polystyrene or polyacrylamide. This process of physically linking the peptide to solid-phase support gives rise to SPPS’s primary advantage: the capacity to limit side-reactions by washing reactants and waste products during every step of extension.
In SPPS, the extension of the peptide during synthesis is a cyclical process involving (1) deprotection of the amino group of the bound peptide, (2) C-terminus activation of the incoming amino acid and coupling to the amino group of the bound peptide, and (3) final deprotection of the N-terminus of the bound peptide, which is analogous to step (1), but with one additional amino acid added. As a result of the initial amino acid being C-terminally linked to the solid support, synthesis occurs in the C-to-N-terminal direction, the opposite of in vivo protein synthesis.
The protection of the N-terminal group is mediated by either tert-butoxycarbonyl (Boc) or 9-fluorenylmethoxycarbonyl (Fmoc). Fmoc is more commonly used, as deprotection requires exposure to a mild base, typically piperidine: conversely, Boc cleavage/deprotection requires a moderately strong acid, typically trifluoroacetic acid (TFA). Activation and coupling of the incoming amino acid carboxyl group is mediated by carbodiimides, such as dicyclohexylcarbodiimide (DCC) or diisopropylcarbodiimide (DIC). These activation and coupling reagents produce a highly reactive intermediate, an O- acylisourea, that is displaced by nucleophilic substitution by the deprotected amino group of the bound peptide N-terminus. After coupling, deprotection of the new N-terminus occurs with piperidine for Fmoc, or TFA for Boc, allowing the next stage in peptide extension. Cleavage of the final peptide occurs under acidic conditions, with Fmoc synthesis using the less harsh TFA, and Boc synthesis requiring stronger acids, such as HF or HBr.
As with the N-terminus of the bound peptide, side chains with reactive functional groups must be protected during synthesis to prevent peptide branching or other unwanted side-reactions. As such, more stable protective groups, like the tert-butyl group for Fmoc-based SPPS, are conjugated to side chains, and are only removed prior to peptide cleavage.
Following peptide synthesis, the peptide is purified using a combination of separation techniques that exploit the electrochemical characteristics of the peptide. These include, but are not limited to: size-exclusion chromatography (SEC), high-performance liquid chromatography (HPLC), reverse-phase chromatography (RPC), or ion exchange chromatography (IEC). RPC, in particular, is widely used in industry due to its versatility. Following purification, peptides are acquired with differing degrees of purity: for instance, >95%, which are suitable for in vivo, chemical, and other functional studies. Cruder peptide products find uses in non-quantitative studies, such as Western Blots.

The design of peptides from either native or novel sequences must take into account the limitations of both SSPS techniques and end-user applications. For instance, a limitation of the SSPS technology is the synthesis of extraordinarily long peptides, such as those over 60 amino acids. Since the SSPS system requires a cyclical process of deprotection, extension, and washing, unwanted products accumulate exponentially with each step, including truncated peptides. Similarly, particularly hydrophobic sequences, containing more than 50% hydrophobic amino acids, may be both difficult to synthesize and solubilize for in vivo applications by the end-user. Below is a list of things one should avoid during peptide design:

Where possible, one can replace problematic residues with conservative substitutions, like cysteine being replaced by serine, or methionine by norleucine. When choosing a peptide from a natural source, one can also shift the peptide “window” more to the N- or C-terminus to exclude problematic amino acids or regions.

Peptide modification occurs at relevant functional groups within the peptide chain or at the termini. Commonly, the N-terminal amino, the ε amino group of lysine, the guanidino group of arginine, the thiol group of cysteine, or the carboxyl group of the C-terminus, glutamate, or aspartate are amenable for modification. A number of modifications are available, including phosphorylation, sulfation, methylation, biotinylation, fluorophore or chromophore tags, cyclization, immunogen conjugation, and the inclusion of D-amino acids or other unnatural amino acids.

The solubility of peptides in a particular solvent is largely determined by the amino acid sequence of the specific peptide. Acidic amino acids, such as glutamate and aspartate, increase the solubility of the peptide in alkaline aqueous solutions, such as a 1% ammonium hydroxide solution. Conversely, the basic amino acids lysine, histidine, and arginine increase solubility in acidic aqueous solutions, such as 5-10% (v/v) solution of glacial acetic acid in water. Hydrophobic, nonpolar amino acids, such as alanine, isoleucine, leucine, valine, proline, methionine, tryptophan, and phenylalanine, decrease the overall stability of the peptide in aqueous solvent, and may require initial solubilization in an appropriate organic solvent (DMSO, DMF, methanol, etc.); after this, the peptide may be diluted into an aqueous solution or culture medium directly.

A typical rule of thumb can be applied if you assign each acidic amino acid with a formal charge of -1 and each basic amino acid with a formal charge of +1. Add up all the formal charges to derive the net peptide charge. If the net peptide charge is negative, the peptide is acidic. If the net peptide charge is positive, the peptide is basic. In either case, one should attempt to initially dissolve the peptide in water, particularly if the concentration is ≤1 mg/ml. However, if solubilization is difficult or does not occur, add 5-10% acetic acid solution for basic peptides, and a 1% ammonium hydroxide solution for acidic peptides until solubilization occurs. Add small volumes of the appropriate solution (e.g. 1-5% of the final solution volume) at a time, and tap or vortex briefly with each addition to prevent over-acidification or alkalinization of the final solution. For hydrophobic peptides, in which 50% or more of the amino acids are hydrophobic, attempt to dissolve the peptide in a minimal volume of a 50% (v/v) solution of DMSO, DMF, or acetonitrile in water. Subsequent dilutions may be performed in aqueous solutions. For cysteine-rich peptides, it may be additionally necessary to add 6M urea or 6M guanidiium-HCl for complete solubilization. Cysteine, methionine, and tryptophan-rich peptides are prone to oxidation, and oxygen-free solvents should be used. It should also be noted that all reagents should be sterile, and that the peptide should be solubilized and aliquoted in a biosafety cabinet to reduce the risk of contamination to the stock and for downstream applications.

To maximize peptide stability, lyophilized peptides should always be stored at -20˚C. Additionally, since peptides are hygroscopic, they should be warmed to room temperature, ideally in a desiccator, prior to solubilization, and the cap on any residual lyophilized materials should be tight to prevent water absorption. Solubilized peptides should be aliquoted and stored at -20˚C or, preferably, below, and repeated freeze-thaw cycles should be avoided. For peptides containing cysteine, methionine, or tryptophan, oxygen-free solvents should be used, and reducing agents, such as DTT, may be added to enhance stability. Glutamine and asparagine are prone to de-amidation reactions that can reduce the functionality of the peptide over time. In general, peptides should be used within 1 year as lyophilized powder, or 6 months as a solution, for optimal activity. 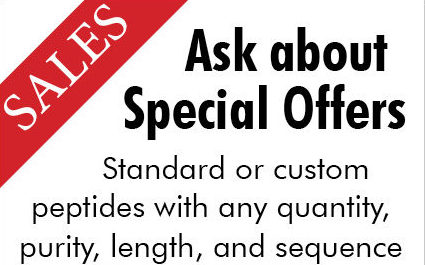